This is an obstruction of a branch of the pulmonary artery by thrombus originating in the systemic venous system (most commonly in the lower extremity or deep pelvic veins). The thrombus travels through the venous system into the right heart chambers and from there it lodges in the pulmonary artery.
Chest pain of sudden onset, accompanied by dyspnea, cough, and in some cases hemoptysis, developing in a patient who has been immobilized or bedridden or has a recent history of surgery, pelvic or lower extremity injury or cancer is suggestive of pulmonary embolism.

In patients with acute pulmonary embolism, the most common symptom is dyspnea of sudden onset, followed by chest pain.
Risk factors that may predispose to the development of pulmonary embolism are the following :
A recent history of abdominal, pelvic or lower extremity surgery
Low extremity or pelvic trauma
A patient with a previous history of thromboembolism, or family history of thromboembolism
Paralysis, immobility, lower extremity casting or immobility
Cancer and some chemotherapeutic agents
Estrogen use (hormone replacement/ oral contraceptives)

Chest pain of sudden onset, accompanied by dyspnea, cough, and in some cases hemoptysis developing in a patient who has been immobilized or bedridden is suggestive of pulmonary embolism
In patients with acute pulmonary embolism, the most common symptom is dyspnea of sudden onset. Depending on the severity of the pulmonary embolism and the patient's condition, dyspnea (shortness of breath) may be prominent at rest or it may be minimal at rest but worsening during activity.  Chest pain (often -but not always-pleuritic) and cough are also common. Low-grade fever occurs in some patients. Hemoptysis also occurs in some cases. In a massive pulmonary embolism, there is severe dyspnea, cyanosis, or syncope and the patient commonly is hypotensive.
The most common clinical findings are tachypnea and tachycardia.
A massive pulmonary embolism manifests with hypotension and cardiogenic shock. A large but submassive pulmonary embolism will not manifest hypotension but it will exhibit signs of right ventricular failure (tachycardia, jugular venous distension, tricuspid
regurgitation) or of elevated pulmonary arterial pressure (an accentuated pulmonic component of the second heart sound-P2). These patients also have an increased risk of early mortality, although the risk is less than in a massive pulmonary embolism. An acute pulmonary embolism with normal systemic blood pressure and no evidence of right ventricular dysfunction when managed with standard therapeutic anticoagulation, generally will demonstrate a benign hospital course.
Pulse oxymetry and arterial blood gases:  A low arterial oxygen saturation, either from pulse oximetry or arterial blood gases in the absence of an adequate explanation ( e.g. acute left sided heart failure, chronic obstuctive pulmonary disease or pneumonia) should raise suspicion for pulmonary embolism. A normal oxygen saturation cannot exclude pulmonary embolism.
ECG
The most common (but nonspecific) finding in the electrocardiogram (ECG) is sinus tachycardia. Other findings that may be present in acute pulmonary embolism include right ventricular strain ( a right bundle branch block and T-wave inver-
sions in the precordial leads, especially the right ones) or the classic, but less common, S1Q3T3 pattern (deep S wave in lead I, Q wave in lead III, and T-wave inversion in lead III ).
The chest X-ray in pulmonary embolism in many cases does not demonstrate significant findings, in some cases it shows nonspecific findings such as atelectasis, an elevated hemidiaphragm, or a pleural effusion, and in some patients it demonstrates classical signs of pulmonary embolism such as the Westermark's sign or a pleural-based wedge-shaped consolidation.
Diagnosis:
In patients with a moderate or high index of clinical suspicion CT pulmonary angiography or a ventilation perfusion scan ( V/Q) scan will establish the diagnosis or exclude it. Note that in many cases a V/Q scan can provide diagnosis, but it has the disadvantage of a high number of indeterminant studies, where subsequent imaging (usually CT -pulmonary angiography) will be required. The most accurate test is pulmonary angiography, but it is an invasive test.
In patients with a low probability of pulmonary embolism a negative sensitive D-Dimers test excludes the diagnosis of pulmonary embolism, whereas if the test is positive, a CT pulmonary angiography ( or a V/Q scan) will be required. The reason for this is that elevated D-dimers are sensitive but have a low specificity.

A patient complaining of chest pain, worse with deep respiration, cough, and mild dyspnea. Recent surgery for a femoral fracture. What are the findings in this chest X ray? 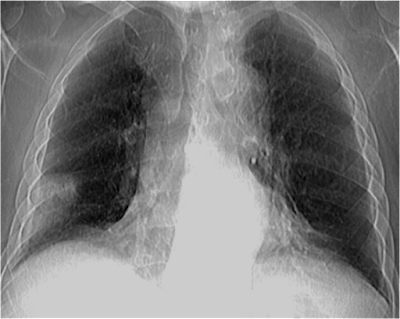 In the lower right lung, there is a wedge-shaped consolidation with its base against the pleural surface. This radiographic sign and also the patient's history is highly suggestive of a pulmonary embolism.

Therapeutic anticoagulation is needed promptly because it reduces mortality in acute symptomatic pulmonary embolism. This anticoagulant treatment is the same as in acute deep venous thrombosis. Some usual treatment options are presented here:
Low-molecular-weight heparin (LMWH) 100 U /kg
every 12 hours (e.g. enoxaparin) or 200 U/kg once per day. Another choice of LMWH is tinzaparin 175 U /Kg SC x 1 time/day.
LMWH does not require any blood test for treatment monitoring (in contrast to unfractionated heparin). It is contraindicated in severe renal failure
or
Unfractionated heparin 80 U/kg IV bolus, followed by 18 U/kg/hour IV infusion. The dose of the IV infusion is adjusted to achieve activated partial thromboplastin time (aPTT) 1.5 to 2.5 times the control value
or
Unfractionated heparin 17,500 U SC x 2 times/day ( 17,500 U SC every 12 hours). The dose is adjusted to achieve the above target aPTT.
A vitamin K antagonist (VKA), warfarin or acenocoumarol can be started on the first or second day of treatment and must be overlapped with heparin for 4-5 days, and until target international normalized ratio (INR) 2 - 3 is reached. Then the parenteral anticoagulant is discontinued and treatment continuous only with the VKA.
When a VKA is started in an acute thrombotic state, there is a decline of antithrombotic proteins C and S before the decline in coagulation factors. This causes a transient increase in thrombogenic potential, until the anticoagulant effect of the VKA starts to develop. The concomitant administration of heparin (unfractionated or LMWH)  during the first 5 days of treatment counteracts this transient procoagulant effect.
For the chronic anticoagulant treatment of patients with pulmonary embolism (usually for 3-6 months) instead of a VKA, one of the newer PO anticoagulants (NOACs= non-vitamin K antagonist oral anticoagulants) can be given. In fact NOACs (dabigatran, rivaroxaban, apixaban, edoxaban are preferred over VKAs.
In stable patients with acute pulmonary embolism, NOACs (such as rivaroxaban, apixaban, edoxaban, and dabigatran) can now be administered as initial treatment without the need for parenteral or subcutaneous medications. NOACS should be avoided in patients with severe renal failure. Choices of |NOACs for pulmonary embolism or deep venous thrombosis include:
Oral rivaroxaban, a factor Xa inhibitor 15 mg x2 times/day for 3 weeks, followed by 20 mg x1/day
Oral dabigatran, a direct thrombin inhibitor 150
mg x 2 times/ day)
Oral apixaban, a factor Xa inhibitor, 10 mg x2/day for a week, followed by 5 mg x2/day).
Thrombolytic therapy in pulmonary embolism is indicated only in massive pulmonary embolism with hypotension or a pulmonary embolism with severe compromise in oxygenation (when there is a deterioration in the clinical course despite anticoagulation), in the absence of contraindications to thrombolysis. Thrombolysis provides rapid resolution of thrombus. A possible complication of thrombolytics is major bleeding ( the incidence of intracranial hemorrhage is up to 3%).
The usual option for thrombolysis in a massive pulmonary embolism is alteplase (t-PA= tissue plasminogen activator) 100 mg IV infusion over 2 hours. (Other choices include streptokinase and urokinase).
Thrombolysis is also indicated in extensive iliofemoral deep venous thrombosis.
In submassive pulmonary embolism, thrombolysis is controversial because it has not been proven to offer a decrease in mortality in such cases.
Contraindications to thrombolytic treatment include:
Absolute contraindications: Active bleeding, intracranial or intraspinal disorders, trauma or surgery in the preceding 2 months
Relative contraindications: organ biopsy, large-vessel puncture, cardiopulmonary resuscitation, within 10 days postpartum.
In patients with a massive pulmonary embolism, when thrombolysis is contraindicated, an alternative treatment is surgical or catheter embolectomy.
The placement of a filter in the inferior vena cava (IVC filter) is indicated in patients with pulmonary embolism who have a contraindication to anticoagulation, or when pulmonary embolism or deep venous thrombosis recurs despite treatment with therapeutic anticoagulation.
The usual duration of anticoagulation for pulmonary embolism or deep venous thrombosis is 3-6 months (most authorities generally recommend 6 months) but in cases of pulmonary embolism without a transient (reversible) predisposing factor, anticoagulation should be continued for a longer time interval, probably indefinitely.
For the long-term treatment for pulmonary embolism not associated with malignancy a vitamin K antagonist (warfarin or acenocoumarol) or a NOAC (e.g. rivaroxaban) is used, but generally, for the long-term treatment of pulmonary embolism associated with malignancy, a LMWH is the recommended choice.

GO BACK TO THE HOME PAGE AND TABLE OF CONTENTS  LINK : 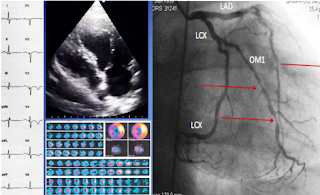